The Astrology of Saturn ;
Authority and Control in the Horoscopes of Tyranny 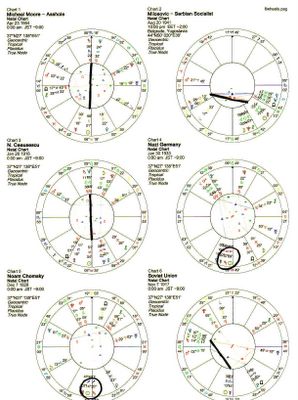 Discordant Angles of Saturn to the Sun in the birth charts of authoritarians. Excuse the poor resolution of these charts (clicking on them to enlarge will help somewhat). I realize that the images will be virtually meaningless to most readers anyway unless they have an understanding of astrology and astrological chart symbolism. I've highlighted "aspects" (angles) between the Sun and the planet Saturn in the individuals and institutions shown and I've described the significance of the symbolism in such aspects in the essay below.
(...That's right, I've included Noam Chomsky on the same page with Nazi Germany). 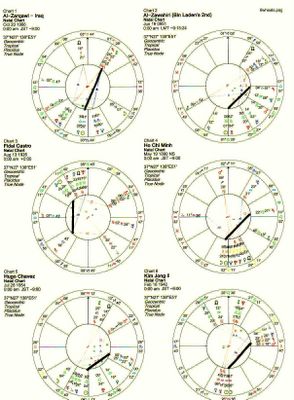 Additional astrological Charts where the planet Saturn is in a discordant angle to the Sun.

I’ve posted essays at this site before regarding astrological correlations with certain political tendencies (and here). As before, I must apologize for what, to some, must be a rather bizarre topic from one so opposed to the schemes of mystics. Indeed, I prefer science textbooks over the Bible, Koran, or The Communist Manifesto (another essentially “spiritual” tract, ultimately).

Those who have taken an interest in astrology do so from a variety of angles. Admittedly, most of these angles are swamped with mysticism and “new age’ thinking – something I find rather annoying.

I’ve studied astrology for years and have been able to form some of my own conclusions regarding correlations between certain temperaments and tendencies and the time and location of one’s birth.

My point in this essay is not to convince readers of astrology’s validity. I have no passions regarding whether or not others take interest in my hobby or not. I actually find, all too often, that those who share this one interest of mine do not share my perspectives on virtually everything else. There are more than a few followers of astrology who are Romantic Idealists (and by definition, leftists) in their thinking, clearly indicating that the appraisal of horoscopes is a subject open to some degree of interpretation.

In my previous essays on astrology, I touched on the dominance of the planet Saturn in the astrology charts of dictators and essentially authoritarian institutions. I’m going to elaborate upon this concept here with the added evidence of the example “charts” (horoscopes) above.

To those unfamiliar with the symbols used in astrology I will merely point out that the symbol for Saturn is the “h” shaped symbol with intersecting cross.

Saturn is “in” everyone’s horoscope somewhere, by virtue of the fact that it’s always in the sky. There are positive influence of the planet (I stress that "influences" is being used here symbolically – there is no actual “cause and effect” at work, but a mere “synchronicity” of time and pattern).

Well placed or benign placements of Saturn in one’s astrology chart can symbolize a capacity for practical achievement, realism, and organization. In the most esoteric sense, Saturn relates to the very concept of reality as crystallization of form – the skeleton of things, it thus “rules” (has affinity to) structures, form, resistance, and endurance. Its opposite is complete chaos and dissolution.

There is nothing in reality that does not I some way crystallize as form however transient or elusive – a localized decrease in entropy.

A well placed Saturn in an individual or institution’s horoscope is not careless, not overly idealistic, or irresponsible. Of course other factors will determine just how helpful, extreme, or perversely the concept is taken.

I have only pictured a few notable charts above where Saturn is not “well-placed.” In the examples, Saturn is overly emphasized; typically in discordant angles to the Sun (although it’s negative influence with other astronomical bodies can often be equally disruptive). I’ve highlighted such discordant angles in the above charts (realizing that most readers will not recognize the layout or variety of symbols in the charts). When considering the horoscopes in their entirely, characters like Noam Chomsky are not meant to be seen as equals to Nazi Germany or Fidel Castro. Of course we don’t know how they’d act if they had absolute power in a non-democratic context – their dominant Saturns offer more than a clue to me. Things like, "being soft-spoken" tell us nothing about how they would actually rule over (or punish) some citizens if they had the power to do so.

I find it particularly interesting that Fidel Castro and his protégé, Hugo Chavez both have the particularly harsh “square” (90 degree angle) of Saturn to the Sun in the same “sign” – Leo. The already harsh and controlling attributes of Saturn with this sign will take on an added dramatic and egotistical flair. Both socialist demagogues are noted for their lengthily (hours) speeches and flamboyant rants. Chavez’s chart tells me that he will strive for total control and when he gets it he will be ruthless and oppressive – like his mentor – regardless of the usual bogus talk of concern for the poor. It might also be added that he will see a reign beyond Venezuela’s borders as his destined right (he’s as much as implied this already on more than one occasion). Of course he will have the full sympathy and support of many in Hollywood, academia, and journalism during future "wars of liberation."

You’ll notice that I’ve included the U.N. charter in the examples pictured. This does not mean that the U.N. is the same as Nazi Germany (also pictured). It does mean that both institutions will have a particularly strong “desire” to accumulate and focus power and to seek absolute control of “their surroundings.” Note also that when free society confronts dictatorship, the U.N. is "neutral."

There are numerous charts “missing” from the above example horoscopes because there are other similarly malefic aspects that can occur in a chart other than those of Saturn. While Hitler doesn’t have Saturn negatively aspecting the Sun in his chart (the limited and consistent aspect I’m describing in this essay) he does have the planet in a prominent position at the top of the chart and squaring (90 degrees) both Venus and Mars, and those are only half the problems in this tyrant's horoscope.

The Chinese Communist Party (which can also accurately be called, “the Chinese government”) was “born” with Pluto, Mars, and the Sun lined up together, which in some ways can be seen as worse than the Saturn issues I’ve described through most of this essay. This is an extremely violent and coercive combination and is hardly mitigated by increasing trade in consumer goods.

Joseph Stalin was a Capricorn with Pluto opposite his Venus in that same sign (the sign Capricorn has some general affinity to the symbolism of Saturn). The Venus / Pluto opposition in his chart is identical to the one for the founding of Nazi Germany (and, curiously, the chart of Al Capone – a notably violent guy). None of these astrological factors are conducive to tolerance, good will, or compromise. They are all symbolic of harsh, cruel, and oppressive tyranny.

While two of Bin Laden’s pals are included in my example charts above (both having the characteristic harsh angles of Saturn to the Sun), I haven’t included Bin Laden himself because the accuracy of his birth date is unreliable.

Some, or perhaps most, of the charts I’ve reproduced here are people or institutions with definite “ideals,” some overtly authoritarian, some vaguely utopian with the usual statist mock concern for “the people” or “the oppressed” (ironically).

There are some “conservatives” with strong Saturn placements (i.e. Newt Gingrich) but as I had stated in my last essay regarding astrology and politics; truly libertarian free-market “classical liberals” are bound to have a strong placement of Saturn’s symbolic opposite, Jupiter. Some may hate to be reminded that both Ronald Reagan and George Bush are examples of this chart indicator of optimism, tolerance, and expansive freedom and open commerce.

Those familiar with astrological symbolism may argue as to my choices in the examples above but I think I can accurately state that anyone strongly favoring a free, tolerant, pluralistic, and open society will not have harsh placements of Saturn in their astrology chart. Conversely, and regardless of “progressive” talking points, anyone having a rigid desire for dominance and control and a preference for powerful centralized political authority will inevitably have a prominent discordant Saturn aspect in their chart. For what its worth, Hillary Clinton has Pluto, Mars, and Saturn squaring Venus and Mercury in her chart. That’s one seriously mean combination (of course anyone with a degree of perceptiveness can see the qualities symbolized without the need of a horoscope – the attributes can be seen on her face).

I always felt that Jane Fonda had a rough edge to her and recently looked up the astrological indicators in her chart – Saturn squaring the Sun (like clockwork) – no wonder she so admired Ho Chi Minh (another Saturn square Sun person).

Not all characters with these nasty astrological indicators will be overtly dangerous. Some will merely make speeches or “documentary” films (Chomsky and Michael Moore) denouncing the people and institutions who have the power they themselves wish they had – “to make a better world”. Some will actually attain the absolute authority they crave over others lives and if they do, the society they rule over will not be free, democratic, or pleasant to live in (ask the people of Venezuela in a few years).

I’ve found most -- but, certainly not all -- who take interest in astrology to be left of center politically. I have no doubt that their response to what I’ve written here would be to interpret things in a softer light for people like Hugo Chavez and, particularly, Noam Chomsky but, the symbolism is quite consistent. They know what I know; a badly placed Saturn is an indicator of a control freak who can be, and usually is, downright ruthless and mean-spirited. The fact that these very same people are the ones who constantly state concerns for “justice,” or “helping the oppressed” is not convincing from the standpoint of an astrology chart, …or common sense observation.